The Secret to Successful Press 1 Campaigns

3 Mistakes Most Call Centers Make and How to Avoid Them

A properly run outbound voice broadcast campaign can optimize agent time, lead to much higher conversion rates, weed out the prospects who aren’t interested in your offer and ultimately generate more sales and profit. Press 1 campaigns are a much more efficient way to connect with your leads.

Despite all these benefits, many call centers still aren’t using press 1 campaigns. They continue to use old dialing techniques and take up agent time with bad numbers, unnecessary data entry, people who aren’t interested…

So how do press 1 campaigns work, and why isn’t everyone using them?

Press 1 campaigns dial out the same as a traditional outbound campaign, but instead of connecting directly to an agent, the lead receives an automated message to press 1 if they are interested in the offer. These hot leads are then routed directly to agents who close the call.

The only time an agent gets a call is when a lead is ready to take action.

Press 1 campaigns are a great way to better target your lead list, purge those who aren’t going to make a purchase/don’t want to be contacted and maximize your agents’ time on the phone. But there are some problems. First is a lack of understanding and perceived barrier to entry.

Many call centers don’t even realize this solution is available to them. They think it will cost a lot of money or that it won’t work for them. They don’t know how to get started.

The truth is that almost any outbound call center can take advantage of outbound broadcast campaigns. In many cases it’s even less expensive than traditional outbound dialing. But there is a specific formula you need to follow if you want to be successful.

rates are generally low out of the gate and it’s difficult to manage the speed to consistently route calls without any wait time for the lead or the agent.

An inefficient outbound broadcast campaign can burn through leads, cut into sales and end up costing you quite a bit of money. But by taking the time to avoid some of the mistakes people make in running press 1 campaigns you can set yourself up for success and start generating more sales.

Not all dialers are created equally. And all of them require some level of tweaking and managing to run effectively. The volume a dialer can handle, the speed at which it can call, how calls are being routed, how it’s adjusted… can all have a significant effect on your campaign.

The best option is to go with a predictive dialer that can handle large volume and learns and adjusts as calls are being made. One of the best dialers out for press 1 campaigns is Godzilla™. It’s the fastest and most intelligent dialer that I’ve seen for outbound call centers.

Mistake 2 – Paying Too Much, or Too Little

When a call center decides to try a press 1 campaign they often make the mistake of spending a lot of money to outsource management of the campaign to a third party that specializes in voice broadcast. These companies might do a decent job, but the extra expense really cuts in to profit.

On the other end of the spectrum, call centers may try to manage the campaign on their own. That’s usually a disaster as there are hundreds of details that need to be dialed in (see what I did there) just right for a campaign to be effective. These days there are better options.

Dialer Host can setup a press 1 campaign in hours, not days. We can quickly allow you to test new verticals, lead lists and messages. We actively manage campaigns, can rapidly adjust and use intelligent dialer systems to constantly get better. And the best part, our system and management costs a fraction of the other guy. Plus, we even guarantee our results.

Click Here to Boost the Performance of your Outbound Campaigns

Press 1 campaigns have distinct advantages. One is that they allow hot leads to transfer immediately to anyone with a phone, wherever they are.

For that reason, some call centers have gone to a remote agent model. This can be effective, and dramatically lower overhead costs… but there are some pitfalls.

One of the biggest mistakes companies make is transferring calls to a phone instead of through agent software. Even if calls are routed through software, often the software itself is difficult for agents to use and wastes time that could be spent selling.

The best solutions are cloud based systems that don’t require any software other than a browser. They need to be linked to the dialer system and populate all information available so the agent can make the sale as fast as possible. The more time on the phone navigating the system and entering data, the less time an agent has to take more calls and close more sales.

Dialer Host offers a clean, simple and easy to use agent interface. Calls are routed through the cloud based system and automatically populates all information available. Notes and dispositions are streamlined to maximize agent selling time. But the best part is that it’s the least expensive system around, with minute costs at $.0069/min.

As you can see, press 1 campaigns can be a game changing addition to your outbound call center. Of course, the devil is in the details and having a roadmap to avoid common pitfalls is key in the success of any campaign. To get your personalized roadmap to press 1 success give us a call today.For a Free Consultation to discover if a Press 1 Campaign can help your business lower costs and generate more sales call us today at (786) 220-3410 or Click Here to Get Started. 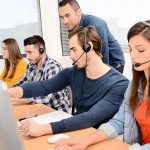